Maybe you don’t know where the island of Pag is geographically located and which country it belongs to. Don’t worry, Anita Palada, a travel journalist, will show you around Croatia and the Adriatic Sea. She will take you to the hidden coves and the most beautiful beach on the island of Pag.

The island of Pag is the fifth largest Croatian island. With a coastline of 302.47 km long, it is the most indented island in the Adriatic. It is located south of Velebit Mountain. A bora, strong, dry wind from the north carries away all the vegetation of the island of Pag. Because of the rocky soil, bare boulders, and elevated plateaus, the island of Pag is also called the Island of the Moon. There is also a 20-kilometer-long trail called Life on Mars because of its Martian appearance.

Curiosity and desire with the taste of adrenaline lead us to them.

The powerful machine of 200 horses made a loud noise on the ship–type trimaran, owned by Tomo Sumić. It began to carry us rapidly from Tribunj, the small Dalmatian town, to Pag island, our desired destination. 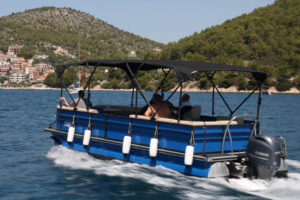 We are curious to visit the most beautiful beaches. 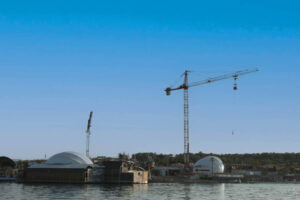 There are numerous beaches on the island of Pag, covered by white glittering sand. Beaches Ručica, and Beritnica with the Stogaj, high stone, well known as a climbing area. The cove Slana and Via Ferrata on it. Beach Seline on the north side. Zr će Beach, where the fun never ends, is also known as the Croatian Ibiza.

We are curious to visit all of them by boat!

Beaches on the Life on Mars track

After 4 hours of sailing, we are finally on Pag island, starting to discover all the coves and beaches that we heard about.

The exit from the wooded area leads to a stone desert with rare greenery, but richly decorated with the blue of the sky and sea. It is obvious that the bare stones are constantly “visited” by stormy winds, rain, and sun. Breaking and shaping them with their power, making them completely bare.

We sail into the bay where there is another beach on the island of Pag, Ručica beach. It is a long pebble-sand beach where the occasional tamarisk tree does not really protect visitors from the summer sun. Therefore, there is only possible to find shade under parasols or refreshments in a nearby cafe, decorated in a casual summer style.

Adults enjoy swimming or under parasols, while the youngest frolic casually in the shallows and build towers in the sand.

The beach is a combination of stone, fine sand, and turquoise sea. It also tickled the imagination of the editors of world magazines such as Vogue and Harper’s Bazaar, who shot fashion editorials on her. Croatian musicians Severina and Ana Rucner did not avoid showing a beach in their music videos. Croatian football representative Dean Lovren also filmed a fashion campaign there.

Sailing from the Ručica beach we sail towards the Beritnica beach. Rocks polished by the violent Pag wind and storm rise above the narrow road. There are large deposits of fine gravel from where scattered boulders spring. Stones in all their sizes and Martian shapes. We become aware of why this track is called Life on Mars!

Read More: 5 Best Trousers Pants Styles Every Man Must Have 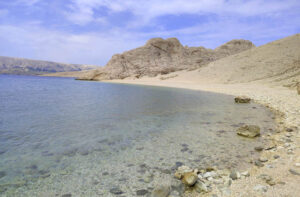 Into our view comes the enormously high Stogaj rock. It is a favorite climbing area for climbers and adventurers who can climb this alien rock in about twenty directions. Even those who have no climbing experience. A course of ten meters is adapted for them, and for those who are more experienced, there are the Skorpion and Spyder courses.

Beneath the Stogaj rock is the beautiful Berit nica beach. It is decorated with three large boulders, well furrowed by sea salt and storm. 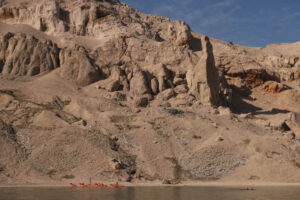 The sand and pebble beach are long and unreal. The sea is crystal clear! Its calm surface tempts you to dive into it. It cools and strengthens the body at the same time. However, there are no trees on the beach, so there is no shade either.

Therefore, while lying on the beach, it is necessary to place yourself under a parasol, which you should take care of yourself. This beach on the island of Pag can be reached from the land side and the seaside. However, arriving by boat is a much better option, especially for those who don’t like walking in the hot sun.

Let’s sail on and explore! The sea is calm, and the blue water is fascinating. Further from Berit nica beach, we come across Slana Bay. The landscape between these two beaches of the island of Pag is full of Martian shapes. It is surrounded by plateaus on the northern side and the blue sea on the southern side. Between them is a rockery on which playful sheep run and bleat, sprouting sparse green grass.

Do not underestimate the length of the Via Ferrata

At the foot of the plateau, a meter, two above the sea of the Slana beach is a via Ferrata. It has enriched the Life on Mars track with additional adrenaline. The passage through the rock is secured by a cable. For crossing the passage is mandatory to use the Via Ferrata set.

The Via Ferrata is about a hundred meters long and can be crossed in about 15 minutes. However, although short, the Via Ferrata is quite complicated to cross. Those who traced it tried their best to make the crossing uncertain from start to finish. Especially, passing requires enormous arm strength.

“However, if you falter in some part, nothing will happen to you! Jump and swim across that part of the sea as it was done before the via Ferrata was installed. Just pay attention to the things in the backpack, which must be miniature for easier passage” – advises an expert who happened to be on our way. 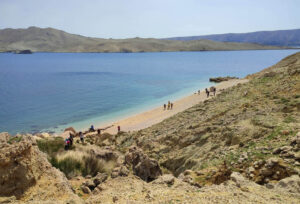 Further from Slana beach, we go towards Malin beach. We reached it by boat, although it can be reached via Ferrata. Also a detour through the rocks, but that is much more demanding. The detour is quite long, about an hour and a half walk from Slana Bay, so it is recommended only for those who like to walk. However, this choice can be dangerous in summer due to the heat and strong sun. No doubt,  the best way to get to this beach on the island of Pag is from the seaside.

The nature-shaped Malin beach is placed to the right at the gates of Pag. It is enriched by water carried by the river sinkhole that rises on the beach. 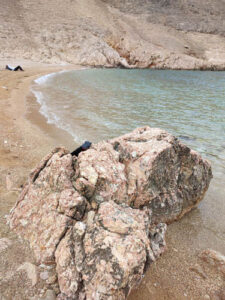 We turn the ship’s rudder towards the north side of the island. Another hidden cove opens up to us and Seline beach on it! The coast is covered with fine gravel and the seabed with sand and flat stones. Swimming in the sea on this side of the island compared to the southern side is cooler. It belongs to the Velebit channel, where frequent underwater sources cool the sea. On this part of the island, you should always be on the lookout for sudden and often unpredictable gales that can hit up to 120 km/h even in summer. 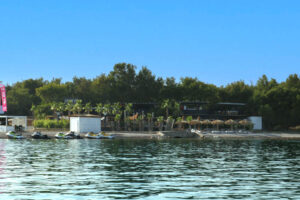 On the other side of the Life on Mars trail is Zrće beach, 4 kilometers far away from in the picturesque place Novalja. All those who love fun, cocktails, and round-the-clock partying must visit it. This beach is called the Croatian Ibiza and is a worldwide synonym for summer fun.

On this beach, in the club’s Papaya, Kalypso, Aquarius, and Noa, the fun does not stop. Each of the clubs can accommodate several thousand visitors, and the music is provided by the most famous DJ artists, Armin Van Buren, DJ Tiesto, and Arno Cost.

In addition to partying in clubs, you can enjoy various sports, entertainment, and recreational activities on the beach. Jet-ski, parasailing, cage ball, and bungee jumping for those braver.  Jumping from a high crane towards the sea is full of adrenaline that those addicted to it can hardly contain.

It’s summer and time to go, and where else but to Croatia, its Adriatic coast, and the paradise beaches of the island of Pag!